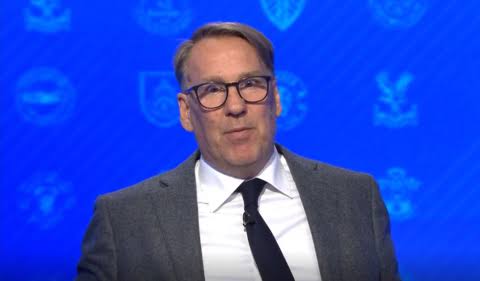 Paul Merson is certain Arsenal will keep up with their ideal beginning to the Premier League season when they face Aston Villa, however expects Manchester United to drop point at Leicester City.

The Gunners are the only team yet to drop a point in the Premier League this campaign, with Mikel Arteta’s side beating Crystal Palace on the opening weekend and Leicester City, Bournemouth and Fulham since.

“I think Arsenal will win this, but it’ll be a slightly harder game than what they would expect,’ Merson told Sportskeeda.

“Aston Villa are really struggling at the moment and have Manchester City to come after this one, so Steven Gerrard will definitely be feeling the pressure.

“There’s a lot going wrong with his team at the moment and he doesn’t know his best XI, which is a worrying sign if you’re a Villa fan.

“Martin Odegaard is someone who has impressed me at the start of the season. He’s a very good footballer and has got a proper footballing brain – I can’t understand how Real Madrid let a player of his calibre go for as little as €30 million!

“He’s led by example so far and looks set to be a key player for the Gunners this season. I’m going 2-1 Arsenal.”

Former Arsenal and England winger Merson added: “Manchester United did sort of ride their luck in their 1-0 win against Southampton.

“They didn’t play particularly well, but you could also argue that Southampton didn’t really come too close to getting even a point.

“Leicester City will be kicking themselves for not getting at least a point against ten-man Chelsea after Gallagher’s red card, which was a bad result for them.

“To make matters worse, Wesley Fofana is leaving for Chelsea and the likes of Youri Tielemans and James Maddison could also move before the transfer window slams shut.

“People are getting a little carried away with Manchester United because of their result against Liverpool, but you have to keep in mind that their performance against Southampton wasn’t great. If that game had ended in a draw, no one would have complained!

“I see goals in this one, so I’m going for a 2-2 draw. Cristiano Ronaldo didn’t start the last two games and Manchester United have won, so I expect him to be on the bench this time around as well.

“His future is still not sorted and I’d be shocked if he stays at the club beyond the transfer window.”

Newcastle United boss Rafa Benitez has lavished praise on his side, citing their Premier League survival as nothing short of a ‘miracle’.

The former Liverpool, ​Real Madrid and ​Napoli boss has received universal acclaim for the work he has done at St James’ Park, having led the Magpies to safety despite the constraints of a shoestring financial budget.

Speaking to ​Marca, Benitez praised the consistency shown by his team throughout the season, whilst highlighting that the financial firepower of a newly promoted side from the ​Championship varies considerably from the league’s big spenders.

“People ask if this was more difficult than winning the Champions League with ​Liverpool. It’s not comparable, as the Premier League is all about consistency. ​Newcastle surviving means that many things were done right over a long period of time.

“People don’t understand the economic difference between a newly promoted club and the rest. There are sides with less of a name, but with a much larger budget for acquiring players.

“The economic difference between a newly promoted club and the rest is very great. There are teams with less name, but with more money to sign. Newcastle has not spent so much. Moreover, there has been a surplus from signings.”

Benitez, who has been nominated for the prestigious ​Premier League Manager of the Year award, continued by saying that Newcastle’s achievements were nothing short of miraculous, praising the work ethic and desire of his players to better themselves.

“Surviving in the Premier League with five matches remaining was almost a miracle. The keys to this season have been hope, the willingness to improve and the relationship between our supporters and the players.

“This squad have overachieved when you take into account the technical level.”

The club’s ownership wrangle continues to be a point of contention, with funding for a potential summer spending spree still very much up in the air. Benitez, along with Newcastle fans up and down the country, will be hopeful of investment as they look to build on a credible 10th place Premier League finish.

Arsenal are tracking the progress of Chelsea winger Callum Hudson-Odoi, who is expected to be sold by the Blues once his loan with Bayer Leverkusen comes to an end in the summer. (The Guardian)

Another Chelsea player, left-back Ben Chilwell, is being lined up for a big-money move to Manchester City after the departure of Joao Cancelo to Bayern Munich. (The Times)

Real Madrid have been saving money for their pursuit of Borussia Dortmund midfielder Jude Bellingham and are prepared to throw everything they have at the England international in the summer. (AS)

Following Bellingham from Dortmund to Real Madrid could be Germany forward Karim Adeyemi, who has also been identified as a summer target. (Defensa Central)

Manchester United pursued a January move for Leicester’s Youri Tielemans after news of Christian Eriksen’s injury, but the Belgian was valued too highly by his current club and so United went for Marcel Sabitzer instead. (Sky Sports)

A striker is among Man Utd‘s top priorities for the summer, with a bid for £70m-rated Juventus striker Dusan Vlahovic on the agenda. (Rudy Galetti)

Liverpool were keen to sign Ghana winger Kamaldeen Sulemana in January before his Deadline Day switch to Southampton, but Jurgen Klopp’s side could reignite their interest in the summer if he settles in the Premier League. (El Nacional)

Tottenham are looking to bolster in defence in the summer and are interested in Crystal Palace’s Marc Guehi. (football.london)

Paris Saint-Germain declined to pay over €10m to sign Inter centre-back Milan Skriniar in January and will instead wait until the summer to sign him on a free transfer. (La Gazzetta dello Sport)

In an attempt to replace Skriniar, Inter made a Deadline Day move for Bayern Munich‘s Benjamin Pavard but saw their approach knocked back. (L’Equipe)

Barcelona have offered a new one-year contract extension to Sergi Roberto, with their proposal also including another 12-month extension clause based on appearances. (Mundo Deportivo)

Naby Keita will not be allowed to ditch Leipzig for ​Liverpool in January, regardless of progression to the knockout stages of the Champions League, according to Leipziger Volkszeitung.

It was announced during the summer that Liverpool had met Keita’s release clause and the Guinean midfielder would move to Anfield at the end of the 2017/18 season.

However, recent speculation suggested that die Roten Bullen could be persuaded into letting Keita leave the club during the winter transfer window.

“Even if we should not reach the knockout stages of Champions League, it would make no sense to allow Naby to join Liverpool earlier,” said RB Leipzig sporting director, Ralf Rangnick.

“We want to qualify for Europe again, and we need Naby for that.”

Leipzig have won just one Champions League game this season, with defeats to FC Porto and Besiktas making progression to the knockout stages a difficult task this year.

Following their impressive maiden season in the Bundesliga, in which RB Leipzig finished ahead of Borussia Dortmund, the Red Bulls will be desperate to make sure their Champions League status continues next season.

The 22-year-old has struggled to replicate the incredible form he showed last year since the announcement of his move next summer.

Questions about Keita’s disciplinary record have also arisen this season, the midfielder seeing three red cards for club and country in less than one month.